We are focused on finding ways to increase the number of insulin-secreting pancreatic beta cells, to prevent or treat diabetes. We recently learned that when beta cells ramp up production of insulin, beta cell proliferation is also triggered. Now we are testing hypotheses to learn how this works. Our long term goal is to identify therapeutic pathways to expand human beta cell mass.

Workload-based tissue homeostasis in the pancreatic islet via the UPR
We were the first to implicate the beta cell unfolded protein response (UPR) in determining beta cell mass through regulation of proliferation. We have numerous ongoing projects in this area, mostly focused on the ATF6 branch of the UPR signaling network.

Our early work in islet biology involved developing an in vivo mouse model in which hyperglycemia is induced by continuous intravenous glucose infusion. This is useful to the diabetes research community because hyperglycemia is not caused by damage to a glucose-regulatory tissue, and because it applies a stimulus for beta cell proliferation (glucose) that can be studied in vitro and in vivo. We provide collaborative access to this technical model as well.

We identified an intriguing connection between blood lipid levels and a region of DNA that determines type 2 diabetes risk in people, and are sleuthing the mechanism of this connection.

Our work described a novel form of beta cell lipotoxicity on the beta cell: reduced compensatory proliferation in response to high glucose. It was previously known that FFAs impair insulin secretion and increase beta cell death. Using our in vivo mouse intravenous infusion system, we found that raising lipid levels prevented glucose-induced proliferation as well. We are interested in how critical regions of the human genome that encode cell cycle regulatory proteins, such as CDKN2A/B and CCND2, impact beta cell biology. 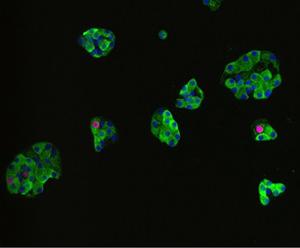 We use mouse models and ex vivo tissue culture to address critical questions in diabetes and endocrinology.